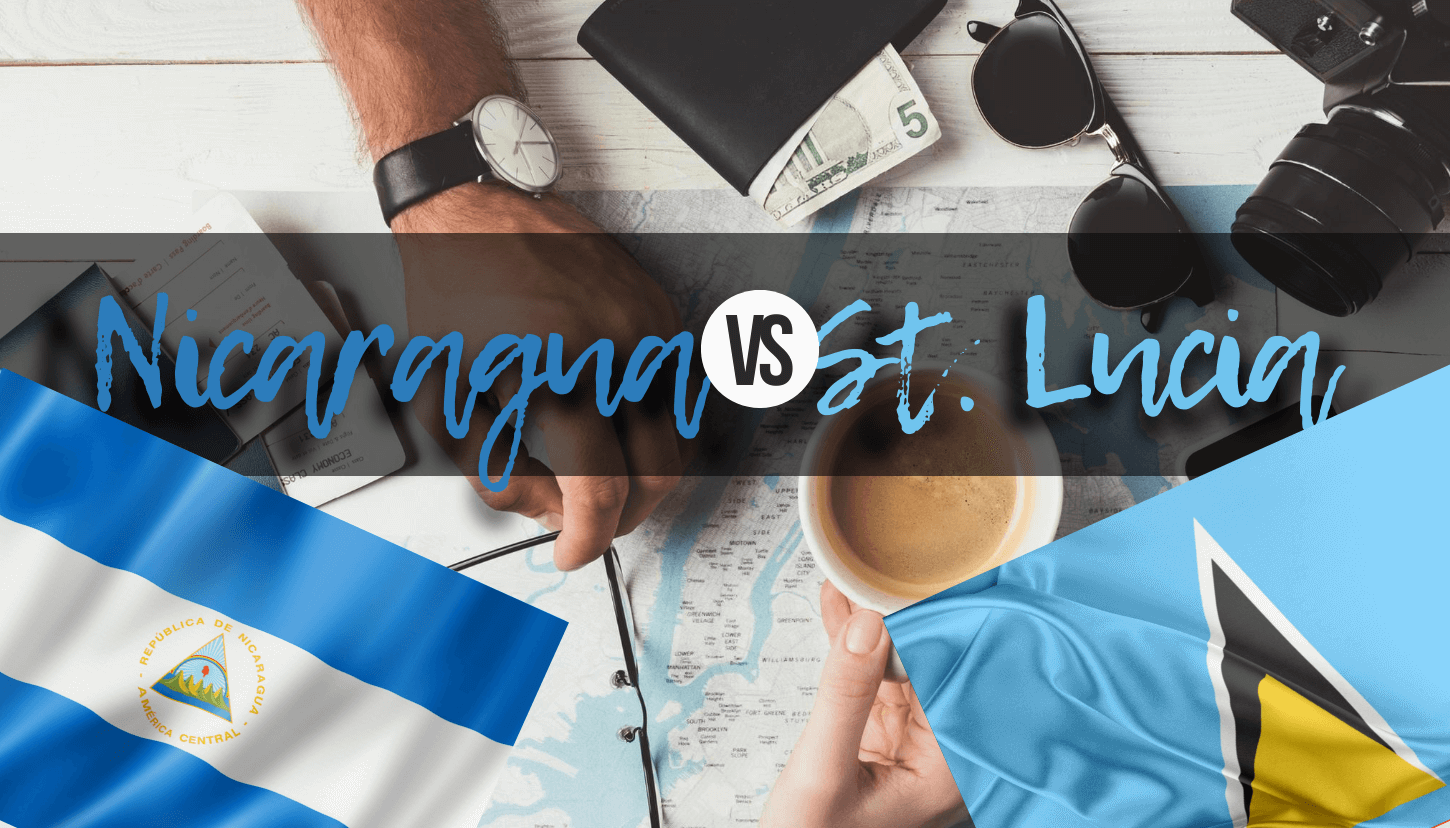 If you’re planning a tropical trip, you might be looking at the Caribbean islands or countries with a pacific coast. Nicaragua is a country with a coast connecting to the pacific ocean and to the Caribbean sea. It is one of the cheapest countries for a tropical vacation and is compared to St. Lucia, which is one of the cheapest Caribbean islands. But as you’ll see, these two destinations are significantly different.

St. Lucia is better than Nicaragua in terms of security, tourist-friendliness, and social atmosphere, while Nicaragua is eight to ten times cheaper, has more authentic food, and has far more diversity of nature and historical sights. Overall, St. Lucia is better for honeymooners and families.

Nicaragua is a country in Central America, with a Caribbean coast and a pacific coast, touching two oceans. Situated in sunlit central America, Nicaragua has the perfect climate for a beach getaway. Its culture has traces of the South American party scene alongside the Caribbean traditions of socializing, hospitality, and deep respect for personal history.

St. Lucia is relatively quieter with a more relaxed atmosphere. If Nicaragua is urban, St. Lucia is suburban. The island has a drive-through volcano, multiple beaches, and a thick tree-covered center peppered with hiking routes and nature trails. There is a nature reserve, several parks, and hotels with affordable stay rates in St. Lucia.

Nicaragua is a lot more lucrative from stay rates and general cost of goods and services compared to St. Lucia. Since Nicaragua attracts domestic tourists, the price of things isn’t too high. Collectively, this comes down to a $500 per-week difference, with St. Lucia being more expensive by around $500 for a solo tourist and $1000 for a couple.

Whether St. Lucia offers anything worthy of the price difference isn’t objectively established. There are volcanoes, beaches, hotels, and nature trails in both locations, so the difference in price is driven by demand and distance.

Transport costs follow the same trend as stay costs, with Nicaragua being significantly cheaper than St. Lucia. It costs eight to ten times less to travel by bus in Nicaragua. You can literally book an entire chicken bus (minibus) for $20, which is the price of a single bus ticket in popular Caribbean islands. The bus fare in Nicaragua starts at two cents, while bus fares in St. Lucia can average $2.5 to $8 per day.

Before we get into further comparison, it is worth noting that Nicaragua might seem a no-brainer since it has comparable attractions, weather, and activities. But one of the greatest reasons to pay more for an alternative destination would be your own security.

Nicaragua has a high enough crime rate to trigger a few alarm bells. American travel advisory highlights other issues with Nicaragua, like arbitrary enforcement of laws (the police’s word seems final) and limited healthcare. Currently, Nicaragua is on “Level 3: Reconsider Travel” while St. Lucia is at “Level 1: Exercise Normal Precautions.”

There is only one step ahead of Level 3, which is “Level 4: Do Not Travel,” and Nicaragua borders it. St. Lucia is as safe as American Travel Advisory can label a location. Still, there are plenty of tourists who visit Nicaragua, stay within popular tourist spots and urban areas, avoid remote locations and return safely. As you read further, keep the security situation difference in mind to avoid unfairly underestimating St. Lucia.

St Lucia has fewer notable attractions compared to Nicaragua. There is a variety of tourist spots in the Central American country with deep historical roots. The town of Leon is significant not just because of its location at the base of a volcano but also because it has a history dating back to the 1500s. The Leon Cathedral is an architectural and historical marvel.

The weather in Nicaragua is windier than in St. Lucia, which isn’t much of a nuisance. The wind is necessary to keep the larger body of land warm with the ocean breeze. Overall, both islands have a temperate climate and sunlit days that brighten up their respective beaches. Avoid the wet season on either island, though Nicaraguan wet season is more unpredictable than St. Lucia’s rainy months.

St. Lucia has far more tourist-friendly delicacies and eateries compared to Nicaragua. The central American country has a more authentic native food and drinks culture. It is because of the larger native population of Nicaragua that its culinary offerings aren’t influenced as heavily by external traditions.

In St. Lucia, you can dine on boiled grits, seafood fritters, and grilled fish, while in Nicaragua, you can expect to have Baho, Deep-fried Plantains, and Soapa De Mondongo. When you cannot tell from a dish’s name what’s in it, you can be sure that the food you’re about to have is authentically foreign.

St. Lucia is far more friendly to honeymooners as it is not too loud and has a safe social atmosphere. Tourist attractions lean towards romantic themes. From a hotel on a cocoa estate to couples deals on activities like snorkeling, much to do in St. Lucia is geared towards couples. Nicaragua isn’t as safe as St. Lucia, so many honeymooners avoid it. Still, it has plenty of couples activities, with the highlight being a private getaway at the Jicaro Island.

For Families (With Kids)

Usually, this metric has more to do with activities for kids but in this instance, safety has to be a highlight. St. Lucia is better for kids since it is more secure and doesn’t have kidnapping incident reports like Nicaragua.

It might not have as engaging a set of attractions as Nicaragua’s Apoyo Lagoon, Masaya Volcano National Park, and a town at the base of a volcano. Still, it is a better place to take your kids as it has water parks like Splash Island Water Park and Treetop Adventure Park. Your kids will be safer but slightly bored in St. Lucia compared to Nicaragua.

Nicaragua has more diversity of nature and connects to two different water bodies. It has multiple volcanoes and Blue holes alongside parks and trekking paths. St Lucia has a rich forest center with plenty of beautiful beaches and scenic views. The nature attractions in both islands are comparable with one difference: there’s more of everything in Nicaragua.

While Nicaragua seems to outperform St. Lucia on most metrics, its high crime rate makes it a poor choice. St. Lucia is more expensive than Nicaragua but is among the cheapest tropical islands. If you’re a honeymooner or a parent, reconsider traveling to Nicaragua. But if you have traveled to countries with high crime rates and understand how to exercise caution and protect yourself, you might find Nicaragua better in terms of cuisine, nature attractions, and party culture.