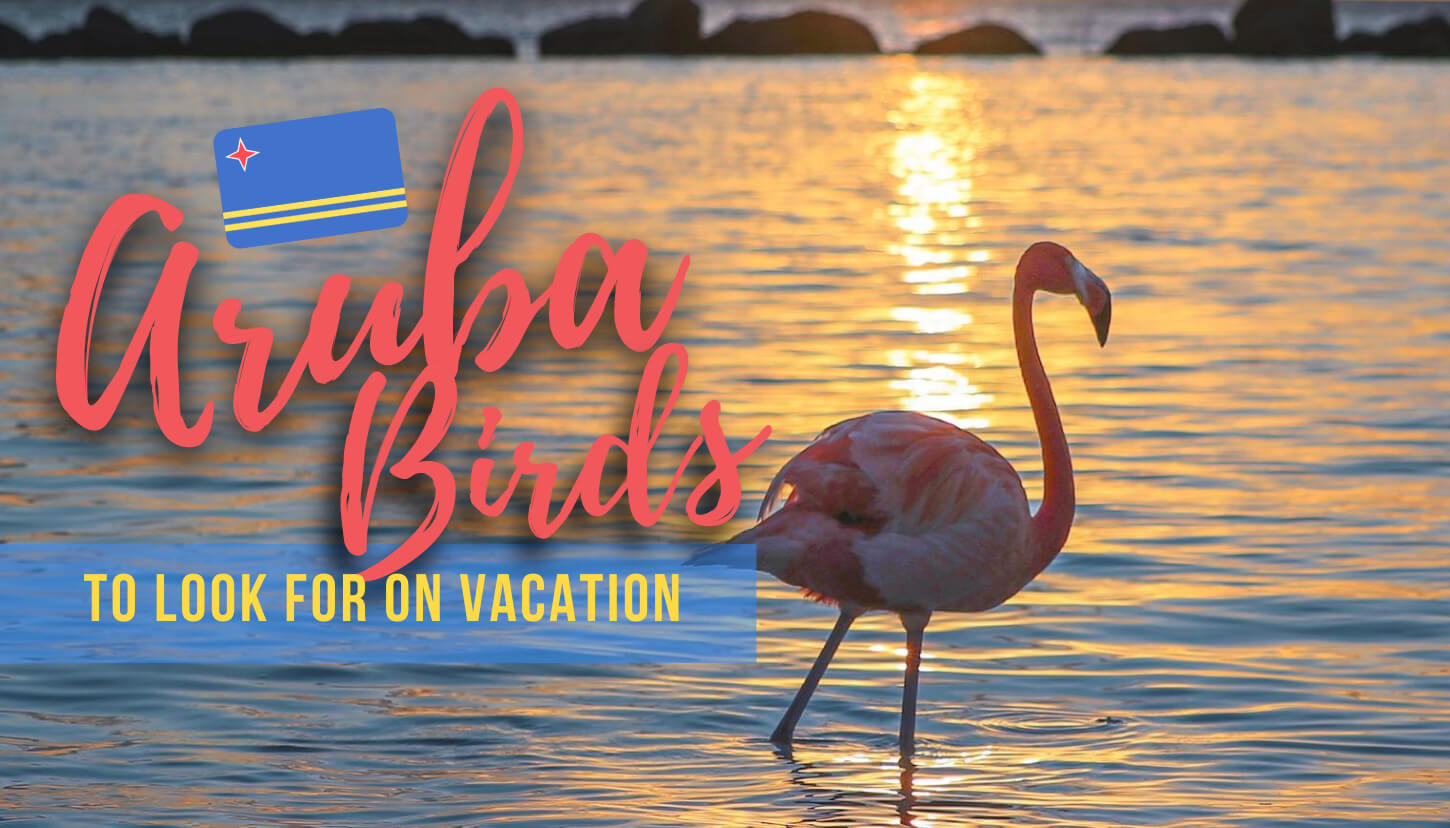 People go to Aruba for its warmth and relatively cheap vacation activities. But very few appreciate the biodiversity of the birdlife in Aruba. One of the less mainstream and more authentic experiences in Aruba is to spot different birds. Here is a list of the most common Aruba birds on the island:

The Shoco burrowing owl, some Tanagers, and the Bananaquit are birds that are exclusive to Aruba. Aside from these, Aruba has 30 types of birds that have been documented on the island. These include flamingos, Stilts and Avocets, Mimids, and Black Skimmers, but those are not exclusive to Aruba.

In this article, you will learn more about the bird species and bird families found in Aruba, alongside brief descriptions that can help you identify them. This post should be treated as a reference resource, so make sure to bookmark it before you continue reading.

Once you have a bird feeder and a reliable spotting scope (or binoculars), all you need is knowledge of the birds. And that’s exactly what this section provides.

These birds are also known as Petcharies; they have a white breast front and a grey overhead and back. They are 9.1 inches on average and prey primarily on flies and insects. They’re found high up in the trees, where they look for insects to consume.

You will not be able to attract them to your wild bird feeder because they are context-conscious birds. However, there are enough of these in Aruba that you will be able to spot them once you know where to look.

The Tyrant Flycatcher family of birds is a very vast one, and birds belonging to it (including the Gray Kingbird mentioned above) can be spotted easily in Aruba. Since there are 438 species of birds within this family, it isn’t possible to name them all in this post.

The Black-capped petrel is an endangered bird that can be spotted by a lucky accident. It is not a common sight in Aruba, so if you spot one, you should try to take a picture. It was assumed to be extinct for a while, but the rumor died down with the advent of the internet.

Current estimates suggest that there are around 2000 to 4000 of these birds in the world. When spotted, they are usually flying over the Caribbean sea. Do not expect them on the Aruban land.

These birds are not as related to old-world quails as their name would suggest. But they were named New World Quails because of their resemblance to the Old World Quails. They have short tails, wings, and necks and a classic quail feather pattern.

They are shy and avoidant in general. If you want to spot them, you should aim your binoculars at the ground and observe from a distance. A grounded bird feeder can help you attract them.

This bird is unmistakably identifiable. It has a pale and sandy color, with eyes that have dark circles around them. Its wingtips usually have the same black color around the tips with the majority of its wings and body being pale brown. Aside from the color characteristics, it looks mostly like a slim pigeon.

The Roseate spoonbill has a bill that is flat and narrow, with a round tip. It looks like a flattened spoon, hence the name.

The color of this bird makes it easier to spot, as it has a flamingo pink underside and pale pink feathers on the rest of its body. It is a large bird that can be spotted in the same water bodies as flamingos.

This bird looks like a green hummingbird with a black tail and wing tips. When its wings are in their resting position, so their tips rest close to the bird’s tail. When the sunlight hits the Blue-tailed emerald, it shimmers with an emerald tint.

This bird looks like it should be rare but is found in large numbers. It is a common sight in the bushy and green-rich areas of Aruba. The Yellow oriole looks like a slightly bulky Tit with a yellow and black color scheme.

The brown pelican is pretty straightforward to identify from the name alone. It looks like a pelican though it differs slightly in size and mostly in color. It is brown overall, with a light head-top region. Its overside can have a prominent yellow color around the head in most cases.

The Shoco is a burrowing owl native and exclusive to Aruba. It has large eyes, a pale underside, and brown color peppered across its wings and its overside.

The Burrowing owl can be found in mud flats and open areas, so don’t try to spot it in Oranjestad. You’ll have far better luck in less developed water-adjacent bodies.

These are a family of new world birds that are a common sight in Aruba. They are small birds with sharp tails and small pointed bills. The Vireonidae often have sparse black in their feathers.

The black skimmer has the same color scheme as a tucan but has a different shape. Its bill is more cone-like, with a red base and a black tip. The black and red colors are more symmetrically distributed in the bill.

The bird’s underside is white, especially around its head, and the rest of the black skimmer is, well, black. If you spot a black, white, and red/orange bird with a cone-like bill, it is most probably a black skimmer.

The crested bobwhite is a quail with an exceptionally small beak and a leaner build. It has the classic white-spot pattern expected in quails, but it also has a crest/peak on its head.

It is very easy to spot this troupial because of its unmistakable features. The Venezuelan troupial is bright red in color, with the exception of its wings, tail, and head, all of which are black. A white line of feathers runs through this troupial’s wings.

This seabird can be spotted taking a flight over the Caribbean sea. It has a deeply frocked tail, lean wings, and a large curved breast front. Its breast and underside are red, and its wings alongside its small head are black.

The Crested caracara is a south American falcon with a crest, orange bill base, and dark feathers. Its breast and neck front is lighter, with standard falcon spots at the base of its neck.

The common ground dove is a south American bird that prefers dusty regions. It has a beige to brown color range with a small, sharp beak. If you see a sparrow-sized brown dove, you can be sure that it is a common ground dove.

The members of the mimid family of birds can be spotted in Aruba. This is no surprise since mimids are inhabitants of the new world and often cross the Caribbean skies to the delight of avid birdwatchers.

The White-cheeked pintail is a summer duck that is seen in the Caribbean islands’ water bodies. For that reason, it is also called the Bahama Duck. It has the structure of a common duck, with a slightly more specific color scheme. The underside of its head is white, and the base of its bill has a red or orange tint. Its webbed feet are dark.

This bird can be spotted all over the American continent and also, more specifically, in Aruba. It has a long, sharp beak and a long tail, giving it a narrow, drawn-out appearance.

Stilts and Avocets are birds that breed on the open ground closer to the water, so they are not uncommon in beach-rich locations. The stilts and avocets you’re likely to find in Aruba have brown/beige heads and pale bodies alongside rich-brown wings and tall legs.

This small bird weighs 0.5 to 0.7 ounces on average and has a dark appearance. It belongs to the flycatcher family and is best identified by its wings, which are layered with white feathers.

The Black-whiskered Vireo is a part-migrant bird with long legs and a football-shaped elongated body structure. It isn’t exclusive to Aruba, though. You’re more likely to spot a Black-whiskered vireo in Florida than you are to see it in Aruba.

Waxwing birds are called that because of their smooth feathers. They look shiny and smooth from afar. You can identify them by their unique crests and sharp, structured feather bodies.

Eared Doves are plenty, and they have been busy populating and colonizing the warmer regions of the Caribbean. They are brown doves with black marks on either side of their faces. These markers are the “ears” that their names refer to.

This is a beautiful member of the flycatcher family, best identified by its color gradient. Yellow at the bottom and greyish brown around its head, the Northern scrub flycatcher is quite easy to spot.

The tropical mockingbird is a lean grey bird with black wings and long slender legs. It has a short and sharp bill that is darker than the rest of its body. These birds can be found in South America as well as on Caribbean islands aside from Aruba.

The Scaly-naped pigeon is a dark pigeon with a greenish-black color and a beak that is curved slightly downwards. These pigeons usually have a yellow beak and sharp, well-divided claws.

This bird has a black collar that divides its underside and its face, both of which are white. The Collared plover has long legs, a stout beak, and sand-brown wings. You might confuse it with a few dark flycatcher birds, so you better have your binoculars to be really sure that you’ve spotted a Collared plover.

Bananaquit is named after its banana-yellow underside. It is an unmistakably unique bird with white streaks running across its grey top feathers and popping-yellow colored bottom feathers that break into pale white towards the underside of its face.

Finally, the most popular bird for general interest and birdwatching enthusiasts are Flamingos. They are very common at Flamingo beach but can also be seen at other beaches of Aruba, especially when there aren’t large crowds around.

You don’t need binoculars to spot these pink beauties!

These binoculars are special because they come with a smartphone adapter that can help you take pictures and videos of birds that are too shy to stick around when you get close.

Because you have the chance to be the first person ever to spot some birds that have been hypothesized to be in Aruba, you should carry equipment that allows you to document the encounters.

A bird feeder ad open as the Twinkle Star Wild Bird Feeder can be very helpful in attracting specific types of birds.

Not all birds can be lured by it, but you can definitely accelerate your bird-spotting efforts with a feeder like this.

Aruba has a rich and diverse birdlife where you can come across dozens of types of birds without even scoping them out intentionally.

Having a guide like the resource above alongside the determination to check off as many birds as you can, you will have an interesting birdwatching vacation in Aruba.